(originally posted 11 June 2011)
While making Bug Tunnel Defense I had many ideas which didn’t make it into the final game. Some didn’t make it off the drawing board but some got as far as being implemented before being removed. 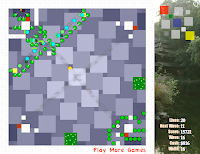 Very early on, as seen in the screenshot above, I decided the enemies had to be chasing after something. That something was sheep who would start from the same entrances a little ahead of the enemies, moving towards a ‘lawn’ at the end. The sheep could be caught by the enemies, either on their way to the lawn or once there, and taken away like Flash Elements TD.

I soon thought better of this though. Without a complete overhaul the lawn didn’t fit, and it was simpler to give a numerical score bonus for sending waves early.

After deciding the enemies would be insects or bugs I came up with the idea of the guns being plants and flowers, as seen in the above image. The smaller tower would be a cactus and shoot spines while the larger flowers would shoot - well what? The screenshot portion above shows an area-effect cloud of pollen but I was never happy with this or the flowers themselves.

The biggest blind alley I went down was adding centipedes. At the end of every fourth mission, after every bug were destroyed (so only on a perfect mission), a multi-segmented centipede would appear. Each segment would be armoured and have many times the health of even a boss bug. And only one of the segments, the last one, could be targeted. Each time it lost a segment it would get faster.

The problem was they were dull: to make them challenging enough they took a long time to kill, but most of this time was spent doing nothing. And this got worse on later missions as both their health and the number of segments increased. It also meant the bonuses gained from killing them took a long time to collect, with the first only available after the fourth mission. They were removed and the bonuses are unlocked by awards instead.
Posted by JohnB at 00:56